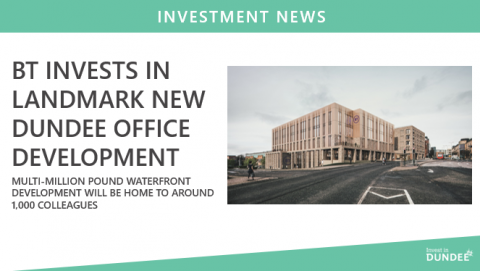 Multi-million pound waterfront development will be home to around 1,000 colleagues

BT has today announced plans to develop a brand new, multi-million pound contact centre in Dundee which will become the new home to around 1,000 employees.

The new office will be at West Marketgait in the heart of the city centre, close to the waterfront and part of a £1bn regeneration area.

When the building is complete, expected in late 2023, the state-of-the art contact centre will be one of around 30 of BT’s new future-fit offices in the UK, developed as part of its ‘Better Workplace Programme’ – the largest workplace improvement and consolidation scheme of its type ever undertaken in the UK.

The investment will help transform the way BT works, create efficiencies and enable it to better serve its customers. BT currently has an office at Ward Road in Dundee, where around 1,000 colleagues are based today, first opening in 1976. The new building will include what the designers have described as a ‘street landscape,’ with areas for colleagues to socialise while enjoying great views over Dundee and the River Tay.

Teams based in Dundee include those providing customer service support to BT’s full fibre customers and small businesses. Since 2020, BT handles 100 per cent of its consumer customer service calls at contact centres in the UK and Ireland. BT has recruited hundreds of people in Dundee in the past four years.

John Alexander, Leader of Dundee City Council, said: “Today's announcement by BT is a huge vote of confidence in the city and in our plans for the future.

"It is clear that BT shares our vision for a Dundee that has a strong and sustainable economy providing jobs, retaining more graduates and making the city a magnet for new talent, while at the same time offering real choice and opportunity in a place that has tackled the root causes of social and economic exclusion.

"The company will be an integral part of that journey with us and I am delighted that BT sees Dundee as a good place to do business and recruit its present and future workforce."

Jane Wood, BT Group Scotland director, said: “This is exciting news for my colleagues in Dundee and reflects BT’s continued investment in Scotland. As one of the largest employers in Tayside, we know that this investment will be welcomed by many people, not least my colleagues who will be based at this brilliantly designed new office.

“We’re pleased that Dundee, an iconic Scottish city, will remain home to nearly 1,000 frontline workers who help customers right across the UK, every day. My colleagues have done an amazing job ensuring that our customers have stayed connected during the Covid -19 pandemic, with some choosing to remain working on site, while other colleagues have chosen to work from home.

“We look forward to welcoming staff into our new building when it’s complete.”

Michael Smart at Crucible Developments, said: “We are delighted to have secured BT as an occupier. The site is undoubtedly one of the best in Dundee and we are extremely proud of the building our team have created. We hope to commence construction as soon as possible and, once completed, the development will bring a prominent brownfield site back into use and further increase the vibrancy of Dundee city centre.”

Teams based at the Dundee office will benefit from Openreach’s full fibre broadband network, as well as EE’s 5G mobile network which the company switched on in Dundee last month.

BT Group plays an important role in the Scottish economy and is responsible for generating £1 in every £115 produced in the country, according to an independent report. It also generated £1.2 billion to the economy of Scotland in “Gross Value Added” GVA, during the 2019/20 financial year.* BT Group supports more than 12,400 jobs across the nation.