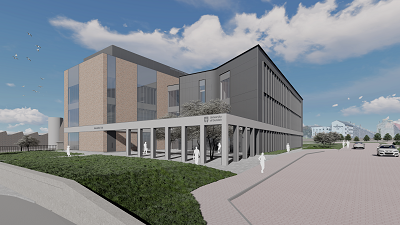 Projects and programmes funded through the Tay Cities Region Deal are already delivering growth and driving investment into the area just a year on from its historic signing.

Today (Dec 17) marks a year since the signing of the Deal document which signalled the beginning of a partnership between UK and Scottish governments, along with public and private organisations from across Angus, Dundee, Fife and Perth & Kinross, that will invest up to £700 million in projects promoting sustainable and inclusive prosperity for the region.

With more than £30m already drawn down by the first partners to enter the delivery phase there has been swift progress made across several projects, with many already entering construction, opening to the public, or announcing new jobs for the region.
A total of 10 of the 26 named projects and programmes have been fully approved over the last 12 months, with many more to come in 2022 and beyond as the diverse range of work linked to the Deal continues to gather pace.

In February, the ‘Growing the Tay Cities Biomedical Cluster’ project led by the University of Dundee was fully approved, as was funding to support the development of new routes at Dundee Airport.

Significant progress has been made on the Perth Cultural Transformation project led by Perth & Kinross Council, with work to renovate Perth City Hall beginning in March, and in April, Dundee Heritage Trust’s plans to transform Discovery Point gained approval.

In May, the public got a first look at the new look Hospitalfield House gardens, fernery and glasshouse café in Arbroath, and a month later two projects that will bring high-speed broadband to rural areas in both Angus and Perth & Kinross local authority areas were fully approved.

The James Hutton Institute enjoyed a landmark moment in August when ground was broken on its International Barley Hub and Advanced Plant Growth Centre.

Abertay University then began construction work on its new ‘cyberQuarter’ cybersecurity research and development hub in September, announcing 30 jobs linked to the Deal as NHS National Services Scotland confirmed they would base cyber operations in Dundee.

The Eden Campus development led by the University of St Andrews at Guardbridge, Fife has also continued to move forward, with Eden Mill Distillery among the high-profile tenants to commit investment, work progressing on a low-carbon District Heat Network that will serve the site, and a programme of industry club activities and webinars rolled out.

2021 was also the year that 5G got up and running in the region, with a range of activity and events linked to the Deal, including a Scotland 5G Hub being located in Dundee, the switch on of public 5G wi-fi in the city, and Esports Scotland staging their grand finals at Dundee Contemporary Arts centre, supported by an ultrafast 5G connection.

Outgoing Chair of the Tay Cities Region Joint Committee, Councillor John Alexander said: “It has been an outstanding first year of progress for the projects and programmes directly linked to the Tay Cities Region Deal. There’s a real spirit of collaboration that has been further developed between the partners, the UK and Scottish governments and our many stakeholders over the past 12 months, and I’m delighted we are now seeing so many highly anticipated developments coming to fruition. It is an indication of the hard work and focus shown by partners working on the Deal that we’ve been able to move forward so effectively, particularly when set against the backdrop of the challenges posed by Covid-19.”

Incoming Chair of the Tay Cities Region Joint Committee, Councillor David Fairweather said: “The progress achieved by the Tay Cities Region partners to date is highly encouraging and I’d like to congratulate all those associated with the Deal on making such significant strides forward in the first year since the signing. It’s excellent to see so many important projects and programmes coming to life across Angus, Dundee, Fife and Perth & Kinross and I look forward to working collaboratively with all those associated with the Deal as we continue to press forward in 2022.”

Scottish Government Economy Secretary, Kate Forbes said: “I’d like to congratulate our regional partners on a fantastic start to delivering the Tay Cities Region Deal, which is already having an impact on the local economy and creating new opportunities at a time of unprecedented need. The partnership working on display across the region’s four local authorities, universities, colleges, and business sector is hugely encouraging and a testament to the commitment of everyone involved. I look forward to seeing more great progress over the coming months and years, and hearing more about the difference our investment is making for local people as we help build an economy for everyone and create a fairer, greener and most sustainable recovery.”

UK Government Minister for Scotland Iain Stewart said: "The deal has great momentum with seven projects backed by £87.5m of UK Government investment among those out of the starting blocks. This past year I've been fortunate to see first-hand the progress at Eden Campus and the James Hutton institute - both having a visible positive impact in their area and building facilities that will have international significance. In the next year we will continue building back better from the pandemic, and the UK Government is investing more than £1.7 billion into projects across Scotland to help level up communities."