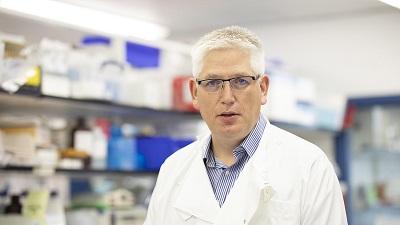 A University of Dundee scientist has been awarded one of the most prestigious prizes in his field in recognition of his pioneering research into neurodegenerative disorders and work to develop novel therapies for Parkinson’s disease.

Professor Dario Alessi, from the University’s Medical Research Council Protein Phosphorylation and Ubiquitylation Unit (MRC-PPU) in the School of Life Sciences, has been named as the winner of the 2023 Jeantet-Collen Prize for Translational Medicine. The award, given by the Louis-Jeantet Foundation, comes with a cash prize of £440,000. Of this, £396,000 is intended to finance the continuation of the of the prize-winner’s research while the remainder is for their personal use.

Professor Alessi has discovered components which regulate pathways linked to human disease, in particular neurodegenerative diseases and cancer. His research efforts have led to fundamental breakthroughs in unravelling the role of LRRK2 kinase in Parkinson’s disease. This has enabled clinical development of LRRK2 inhibitors which are currently being tested in late phase clinical trials as therapeutic strategies to slow the progression of Parkinson’s disease in patients.

The award will be presented at a ceremony in Geneva, Switzerland, on Wednesday 26 April.

Professor Alessi said, “I was surprised but greatly honoured to be awarded one of this year’s Louis-Jeantet prizes together with Brenda Schulman and Ivan Đikić whose research I admire enormously. I would like to thank the University of Dundee, UK Medical Research Council, Michael J Fox Foundation for their long-term support which has made the research possible.

“I dedicate this award to my collaborators and the past and present talented researchers who have worked in my lab. Our research has been greatly inspired by the many people impacted with Parkinson’s who I have had the privilege to meet, which has kept us going over periods when progress was slow.

“Although our work has helped illuminate some of the biology surrounding LRRK2 and Parkinson’s, there is still lots to do to develop treatments that slow disease progression. I intend to use the prize funds to help progress new therapies.”

Professor Alessi was born in Strasbourg in 1967. He earned his Bachelor’s and PhD degrees from the University of Birmingham and carried out postdoctoral work at the MRC-PPU at Dundee. He has been a group leader in the MRC-PPU since 1997 and was appointed its director in 2012.

His research focuses on unravelling the roles of biological pathways controlling cellular communication that become disrupted in disease. He has contributed to understanding pathways involved in diabetes, cancer and blood pressure in addition to his work on neurodegenerative diseases.

Dr Megan Dowie, Head of the Molecular and Cellular Medicine Board at the Medical Research Council, part of UKRI, said “Professor Alessi has made many invaluable contributions towards our understanding of the cellular pathways related to Parkinson’s disease over his esteemed career, and this prestigious award is most deserved.

“The work he leads at the MRC PPU is a great example of strong discovery research, aided by an excellent collaborative environment with fellow academics and industry and leading to the development of potential new therapies for this devastating disease.”